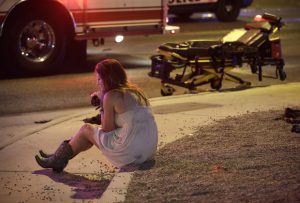 A suspected “lone wolf” gunman sparked the deadliest mass shooting in modern US history when he opened fire on a crowd of concertgoers from the 32nd floor of a Las Vegas hotel, killing at least 58 people and injuring hundreds more, police said.

More than 22,000 people were attending the performance by country music star Jason Aldean Sunday night at the Route 91 Harvest Festival when the gunman hammered out a window at the Mandalay Bay Hotel and Casino and began firing with a cache of weapons.

Authorities who stormed the suspect’s room found that he had killed himself.