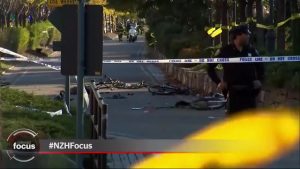 At least eight people are dead in Manhattan after a man in a rented Home Depot ute mowed down pedestrians and cyclists and then emerged with fake guns in what is now being treated as a terrorist attack.

The ute veered off the road and drove between 10 and 20 blocks down a popular bike path crowded with people, including runners and children heading home from school.

CBS News reports the suspect is …..